WHITLINGHAM: So many posts, so few birds

With a Black Tern at Rockland and a variety of interesting raptors reported within a 10 mile radius I decided it was worth putting a few more hours in at Whitlingham. It wasn't. With autumn approaching I can hear the coast calling, and as a result visiting less often until the ducks start coming back. That said, if anyone sees any collections of large gulls at Whitlingham then give me a shout, Yellow-legged Gull is possible late August, and I still haven't seen Med Gull here (ever) or GBB Gull (year).

Ps. If you want a laugh at my expense, I thought I had found a Grey Plover across the river at Thorpe. At 8x I spotted a black band, edged with white, and what appeared to be a grey back. What could it be? Not convinced but ever hopeful I phoned Cathy to bring my telescope, upon which point I hurried back and saw this very nice flint. Click to enlarge the embarrassment. 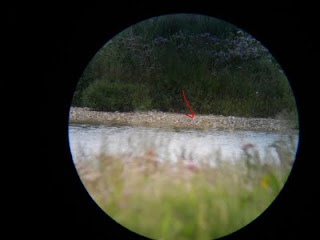