EAST NORFOLK: Loads of Cormorants and a winter Skua

29th January 2012
We spent Sunday afternoon doing a spot of leisurely birding in the Great Yarmouth area. The Velvet Scoter that has spent the past week or so close offshore was easily picked up from near the Britannia monument, whilst a couple of Med Gulls were being buffeted by the strong winds. We had a look around Bradwell for the Ruddy Shelduck, which wasn't visible from the main road but was found behind some farm buildings close by. Returning to Yarmouth we stopped at Caister beach. Scanning out to sea I saw a raft of Cormorants that continued for an age. The choppy water meant an accurate count was impossible, but there were at least 350 birds there. A couple of Red-throated Divers flew past whilst I was trying to count the Cormorants, and once I'd given up I found three very close inshore, barely past the fishermens' lines. A Great Skua flew past heading south, I'm pretty sure its my first winter record. An Eider north was also of interest. A couple of Little Egrets flew over the road at Ludham Bridge on our way back. 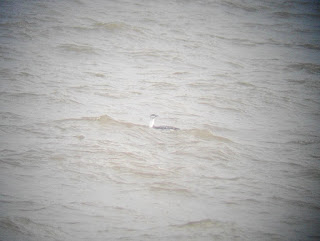 Red-throated Diver close in to shore
Posted by James Emerson