My first bird of the year was predictably Collared Dove, but the second bird was less so.  Whilst I was having a cup of tea I heard Pink-footed Geese, and looking out of the window a skein flew high westwards.  Whilst finishing breakfast news came through that the Hoopoe was still at Lowestoft.  Cathy's interest in birds is partly linked to mine, but she had wanted to see a Hoopoe since she was given her first bird book as a child, so we put plans to go to Whitlingham on hold to go and see this iconic bird.
Arriving at Lowestoft we found the green roofs that the Hoopoe had been favouring, but as it happened it was now feeding on nearby wasteland.  A cracking bird, and easily the best bird I've seen on January the 1st.  After a while we went round to ASDA, and a look upriver gave us a masterclass in diving, with a Black-throated Diver, a Red-breasted Merganser, Shag and Cormorant.  It was almost enough to make us start a "birds seen from supermarket carparks list." 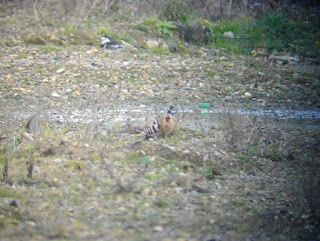 The birds active feeding was too much for my poor digiscoping
Rather than go back to Norwich directly, we headed off to ASDA in Great Yarmouth.  We walked around to Breydon Water, although seeing someone in the hide I decided not to make the assumption that it was a birder and to look from the path.  The tide was in, making for a bigger spectacle but more distant birds.  There was no sign of the Spoonbill that has been overwintering here, but loads of the commoner waders.  On the way back we added Kestrel and Sparrowhawk to the year list.
Posted by James Emerson