WHITLINGHAM: A probable hybrid and a nice woodland walk

15th January 2012
So far its been quite slow going at Whitlingham. I noticed an odd-looking female Pochard, which had a uniformly dark head, clearly marked white patches alongside the base of the bill (like some female Tufted Ducks) and a seemingly thicker or differently shaped bill. It could well be a female Pochard x Tufted Duck hybrid, hopefully I can get some better pictures to help confirm this. Well hopefully I can find a Smew or something interesting, but you know what I mean, a hybrid is better than nothing. 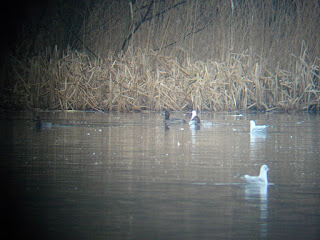 With the wildfowl looking similar to the past couple of weeks I decided to head into the woods for a change. This paid immediate dividends when I found a Stoat rummaging around in the leaf litter. Further round I had to move off the path to allow a pack of Nordic walkers* through. Most of them were grateful, although one of the last ones muttered something about there being a murder in the woods, a reference to the bird-themed episode of Midsomer Murders broadcast last week, were two twitchers were killed in a wood**. Despite their ski-poles, it appeared they hadn't been up the steep steps as there was plenty of wildlife about. A while spent watching a mixed tit flock paid off with close views of a Nuthatch, whilst further round a Fox ran off through the undergrowth and I got neck-ache checking through a flock of Goldcrests.
* Nordic walkers are people that walk around with two ski poles.  I think the original idea was that it was practice for skiing, but now it seems to be a fitness activity in its own right.
** As you'd expect this was straight out of the annals of birding stereotypes, and centred around the stringing of a Blue-crested Hoopoe (sic).
Posted by James Emerson