WHITLINGHAM: Week 5 and it's all quiet again

28th January 2012
Spring was in the air today, with pairs of Egyptian Geese using every vantage point to noisily proclaim their territories.  I did actually see a pair mating in late December, so there could even be some young anyday now.  The Great Broad was busy with canoeists and model yachters, the result of which was that much of the wildfowl had departed, much of it to Thorpe Broad.  I spent a while at the bird screen picking through the ducks, of which the presumed Pochard x Tufted Duck was the only interesting one.  A Snipe on one of the smaller islands was out in the open and made a nice change from the usual undergrowth lurking.  A couple of Lesser Redpoll flew over unseen, but I managed to track them down to some riverside Alders along with a raucous flock of c30 Siskin.  A few more Siskin were further along the path. 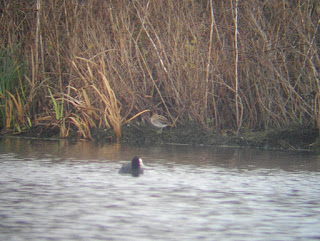 The farmland at the top of the Lime Tree Avenue was devoid of birds other than a flock of Jackdaws, but I struck gold looking back towards the city, with one of the cathedral Peregrines perching on the spire.  Walking back along Whitlingham Lane I went across Trowse Meadows and saw two Kingfishers, one on the ditch that runs along the lane and one on the river.
Posted by James Emerson