Following Sunday's butterfly trip, I fancied a trip to have a look for a dragonfly that I haven't seen before, Red-veined Darter.  Several of these migrant dragonflies arrived on the North Norfolk coast a few weeks ago, and I had heard that they were still present at Kelling Water Meadows.  As it was we found at least four male Red-veined Darters, one on the path level with the pool, and at least three more males flying around along the northern edge.  Everyone else who has visited seems to have got some great perched up photos, but whilst I was there they only perched on rushes a bit away from the path, so I only got this record shot.  For some much better shots try David Bradnum's Blog.  We also saw several other odonates and loads of butterflies. 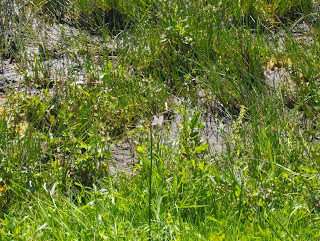