Many thanks to everyone who voted in the Whitlingham poll, which is now closed.  As expected the majority were against any alterations, an understandable view but sadly not one that will happen.  Two people were in favour of turning it back into a quarry - this was suggested to me when discussing plans for Thorpe Marsh recently, the point being that quarries can be better for birds than sterile lakes.  Interesting Lafarge (who created Whitlingham) currently have a large quarry (Mangreen Quarry) just south of Norwich near Dunston.  Unfortunately there is no nearby public access, and I believe the plans are to return it to agricultural land once quarrying is complete.

Of the three people that did vote for one of the three proposals, all of them went for Feilden & Mawson, which includes the Spa with built in restaurant.  There was an emphasis on zero-carbon holidaying and the possibility of a bird hide (where I wonder?). This proposal has one other thing going for it that I didn't tell you before - whilst not mentioned in the details, a close look at the birds in the top right corner of one of their artists impressions suggests that they will look to introduce a Gigrin-style Red Kite feeding station. 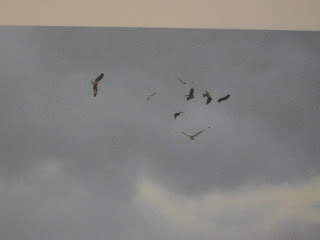