I had considered a long walk into the farmland around Caistor St Edmund today, but decided against it. Instead I headed for Whitlingham to try to pick up some of the stuff I missed on my first visit. Again no sign of any Water Rails, so I headed off through the conservation area. Part way along I spotted the bright pink of a male Bullfinch, then I heard it calling to another before they both flew off. Nearby I also saw a Redwing, a bit of a relief as they seem to be scarcer than usual of late. With these two rather attractive birds seen I headed to the bird screen, where I saw two drab but equally welcome Goldeneye. 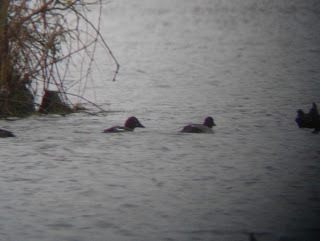 A quick look over to Thorpe revealed a similar size flock of Snipe to my previous visit, but hardly any ducks. I walked along the riverbank to Whitlingham Marsh, adding a pair of Marsh Tits. A flock of Redwing flew out of a tree near Whitlingham Barns, and the settling pools at the sewage works held loads of gulls but little else. On my way back a Sparrowhawk flew off the barns. I took the woodland route back to the broad, getting good views of Goldcrests near the path. This was to be my last addition of the trip, taking my patch tally up to 52 species for the year.