More local birding, and I had hopes that the cooler weather would have brought in some more ducks. Not even necessarily scarce ones, as I haven't seen usual winter fare such as Shoveler and Wigeon here yet in 2013. In the car park I noticed an interesting looking bracket fungus, which I shall return to later in the post. Starting at the Little broad I once again failed to see Water Rail, hindered in part by a fallen Ivy covered tree that blocks the view of a favoured section of bank. A 1st-winter Grey Heron was the first one of six that I saw on site today.

Continuing along the north shore of the broad I saw a Goldcrest flying in and out of the path-side brambles. Winter mornings are not great times to observe wildfowl in the conservation area because of the light, but I struggled gamely on to count the ducks (all species showing a decrease in number since the start of the month except Teal). Following a discussion about Cormorants I photographed the three on the posts to check the gular angle at home - 2 carbo and one unassignable in case you are interested.

Further round I scanned across to Thorpe, seeing my first patch Lapwings of the year. I saw 11 Snipe, but there are undoubtedly many more - Chris estimated 200 when they were put up by a Peregrine earlier in the week. By now kayakers were out on the broad, so little else was added to the list on the way back.

Back at the car park I had a look under the bracket fungus I had found. As I suspected it showed an unusual pattern, a sort of 'maze'. It appears that I have found a Conifer Mazegill (Gloeophyllum sepiarium), a species that is particularly rare in Norfolk. By 2011 (the latest report I have seen) this species had been recorded twice in Norfolk, both in the 1970s. So unless it has been recorded recently, this could well be the first Whitlingham record and 3rd Norfolk record.

[Update] The county recorder believes this could in fact be the even rarer Gloeophyllum trabeum. I have sent a sample off, which will hopefully confirm this, although there is a chance that the cold spell we had could have damaged it too much to ID conclusively. 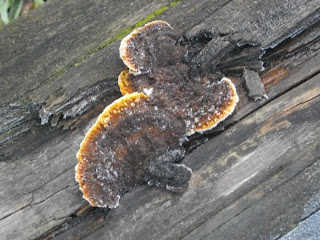 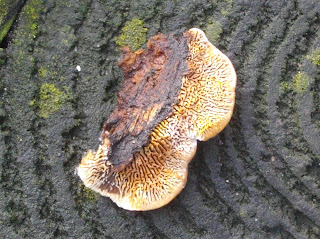