Time to get the patch (and 'Foot It') lists started, so I shouldered my 'scope and headed off to Whitlingham. I was surprised to see Whitlingham Lane so empty after the road-as-car-park scene from my last visit - perhaps they had checked the weather forecast. I walked around Trowse Meadows hoping for a Kingfisher, but there was no sign of any. Two Mistle Thrushes in the field south of Whitlingham Lane were a nice surprise - it took me until August to see these last year. Heading down to the Little Broad the drizzle started. 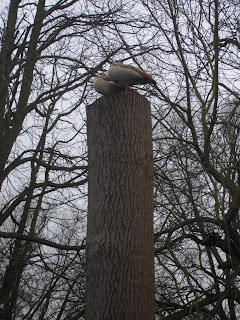 Two Lesser Redpolls flew over calling and three Cormorants were perched on the huge pylons across the river. At the conservation area I saw my first Pochard and Teal. Further round I stopped to scan Thorpe Broad and noticed a flock of nine Snipe flying around. I saw more in the margins, and they joined the first lot, with around 25 flying at one time. In total I counted 40, but I'm sure more were present a bit further into the vegetation.

The rain was getting heavier by now, so I headed into the woods. Birdsong was muted, with nothing of interest with the Long-tailed Tit flock. Back down Whitlingham Lane there was a Great-crested Grebe on the river, and a lone Lesser Black-backed Gull perched on a buoy. A flock of around 30 Siskins flew over, briefly settling in the Alders, and some movement in the vegetation looked rather like untickable views of a Water Rail. Some Starlings on Whitlingham Lane brought this years patch list up to 40, and my Foot It list to a rather disappointing 42 so far.
Posted by James Emerson