I made a brief visit to Whitlingham this evening, hoping to catch up with a Hobby or Cuckoo, both of which had been seen earlier in the week. As I walked between the two broads a Weasel ran across the path and into some nettles. I waited quietly to see if it was still there, and was rewarded with a great view of it's head as it stood up to see if the coast was clear. A bit further round I had a Vole sp. run across the path as well.

There had clearly been another influx of Whitethroats since my last visit, they seemed to be singing from every suitable area of scrub along the north shore. A few Blackcaps and Chiffchaffs were also singing, but the birdsong in general was rather muted, and it didn't come as any great surprise that I didn't hear any Lesser Whitethroats or Garden Warblers. Looking out across the broad large numbers of hirundines (mostly House Martins and Swallows) and Swifts flew low over the broad. Looking over to Thorpe my hopes were raised by a soaring falcon, but as it got closer it became obvious that it was a Kestrel. 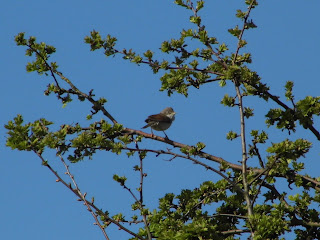 On my way back along the south shore I saw the first brood of Canada Geese of the year (8 goslings) and a large brood of recently fledged Mallard ducklings, accompanied by a dark 'bibbed' type adult. 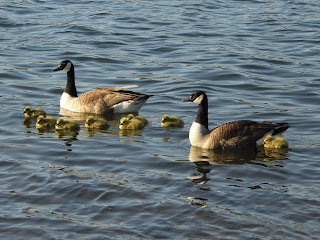 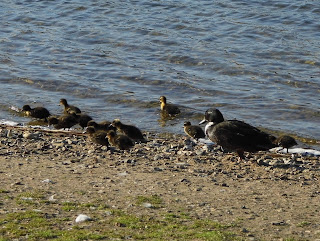