I made an early morning trip to Whitlingham to complete May's WeBS count. The weather was overcast, which meant that a huge number of Swifts and hirundines were feeding low over the broad. They moved in relentless waves across the surface of the water surface, occasionally swarming up to form a screeching cloud when a patch of sunshine broke through. Twice they were parted by a male Kestrel cutting through the flock, but I once again failed to see the Hobby that has been kicking around for a couple of weeks. Lots of Swallows and House Martins were mixed in, along with a few Sand Martins.

It appears that this year is the best year I can remember for Greylag broods, as well as the super-brood of 13, there were broods of 2, 2 and 3 at the west end (plus the Swan Goosiest hybrid had a lone gosling), a brood of 3 in the conservation area and two broods of 5 at the east end. One brood of nine Canada goslings was along the south shore of the broad but there was no sign of the other one from last week. Duck-wise the Pochard had gone, so it was three Tufted Ducks on the Great Broad and one Gadwall at Thorpe. 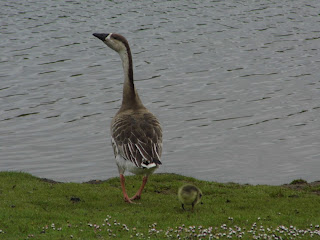 Garden Warbler was the pick of the passerines, whilst I once again didn't see or hear a Cuckoo. A few more plants were in flower, including Greater Celandine, Common Stork's-bill and Dove's-foot Crane's-bill. 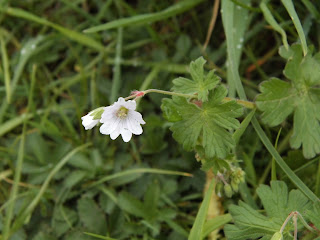