By the start of May most warblers are present and singing locally, so I headed down to Whitlingham in the morning to try to connect with the ones I hadn't seen. Conditions weren't perfect, a strong breeze in particular made hearing an pin-pointing bird song that bit more tricky. Despite this I managed to clock up nine species of warbler (Gropper being the only one I could reasonably expected to have heard - I don't know of any being seen here this year so far). I had to work hard to get views of a calling Lesser Whitethroat, but managed good views of two Garden Warblers. A count of Common Whitethroats produced a minimum of 12 around the Great Broad, almost certainly an undercount, with more elsewhere.

Whilst scanning across to Thorpe a passing boat disturbed a Common Sandpiper from the river margins, which flew up and appeared to land on the shingle edge of Thorpe Broad. Swifts were still very much in abundance, and the first brood of Greylags has hatched, albeit only two of them. There was no sign of the Mute Swans on the nest near the bird-screen, but no sign of any cygnets either. This nest was predated last year, so perhaps the same thing has happened again. There were a few butterflies around, including a Peacock, Orange-tip and two Green-veined Whites. 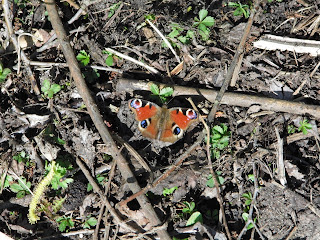 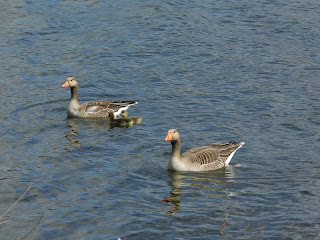 Incidentally the RSPB and Broads Authority are running a dawn chorus walk, boat ride and cooked breakfast at Whitlingham at Whitlingham tomorrow - I would welcome any sightings (or particularly counts) of singing warblers if any readers of the blog go on the walk.
Posted by James Emerson