An overcast day, once again bringing the Swifts and hirundines low over the Great Broad. There had been a change in the ratio since my last visit, with a rise in House Martin and Swallow numbers and a decrease in Swifts. I left the south shore and went through the woods to look for a 'green man' carved stump that is somewhere in the woods. I didn't find that, but did find some interesting fungi on a log by the riverside. Shortly after a Hobby flew over towards Thorpe Marsh, my 99th patch bird of the year. 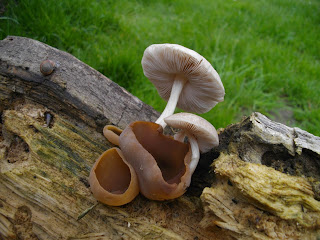 
Back at the broad I was scanning the conservation area when I heard the mew of a Buzzard. Looking up there were actually three Buzzards, two of which continued to circle whilst a third bird (presumably an interloper) continued northwards. Birdsong was muted, but I did turn up a couple of interesting insects, notable Red-and-black Leafhopper and Red-headed Cardinal Beetle. As I neared the Watersports Centre a/the Hobby flew through the Swifts. I stopped at a suitable vantage point to try to re-find it, and in doing so noticed a Swift with a lot of white on it. The white wasn't constrained to the rump, and it was the same size as a nearby normal plumaged Common Swift, so it was fairly straight-forwardly an aberrant plumaged Common Swift. It continued to swoop backwards and forwards along the north shore of the broad, and eventually I managed to get several photos of it, none of them particularly sharp. 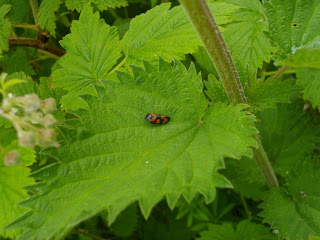 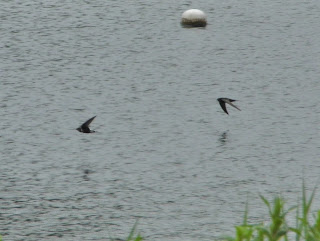 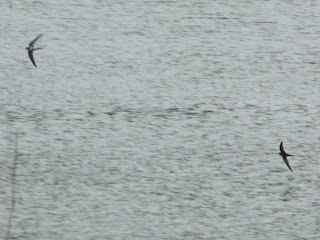 Incidentally if anyone does know where the 'Green Man' stump pictured here is, I would appreciate directions.