It's the time of year when I start to bring together the 2014 Whitlingham Bird Report. As a result of the mild start to the year the number of species reported so far is rather modest, so I would be grateful for any sightings. Of particular interest are any locally scarce birds, counts or sightings of colour-ringed birds, whilst another area that is always under-represented is flyover birds like wild geese and swans.

Below is a list of birds that might reasonably be expected to be seen here that I have not heard about at Whitlingham in 2014:
As well as Whitlingham C.P. I include records from the surrounding area (i.e. Trowse Meadow, Trowse Woods, Thorpe Marsh, Whitlingham Marsh, Whitlingham Sewage Works) see the map below 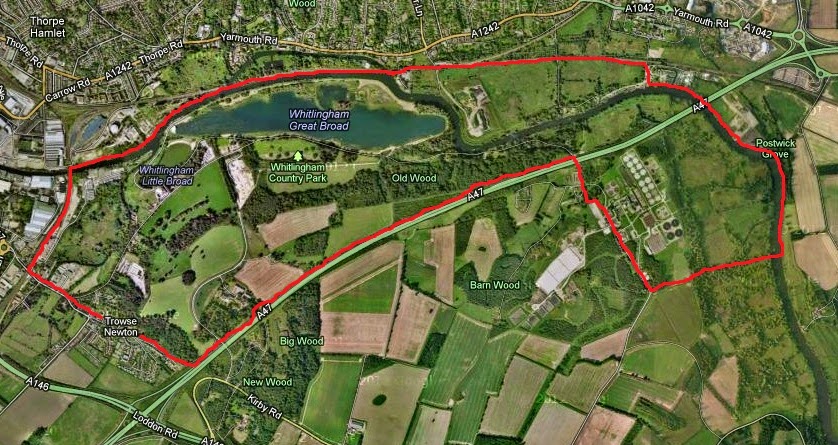 To report a sighting you can either email me at: whitlinghambirds 'at' yahoo.co.uk, leave a comment on this blog post, message me via BirdForum or via Twitter (@Norwichbirder).

If you want to see what the bird report looks like then there is a link to the 2013 report at the top of the blog.

Thanks to everyone who has already emailed sightings throughout the year. Sightings posted online will have probably been added, but if posted under a pseudonym may not have been properly credited, so feel free to let me know if this applies to you and I shall add your name to the acknowledgements section.

Unless we have a bird-filled end to the year, the final report should be released during the first week of January 2015.
Posted by James Emerson