Following our Suffolk sojourn, Dad & I called in to Silfield nature reserve on our way back to Norwich. Silfield is a small nature reserve on the opposite side of the A11 to Wymondham. It was constructed mainly as mitigation for the destruction of some Great-crested Newt habitat. I had been vaguely aware of its presence for a while, probably from reading it in the EDP years ago, but otherwise knew very little about it. This year, mainly as a result of some postings on the Norfolk wildlife facebook group I had heard more about it, in particular that one of the ponds has Bladderwort in it. Bladderwort is an interesting plant, it is insectivorous but also aquatic, trapping tiny water creatures in its eponymous bladders. This was a plant that I had wanted to see for a while, and Nick kindly sent me a message earlier in the week to tell me that it was in flower.

Having left the A11 at the wrong turning we had a bit of a long route round to get back to Silfield (I'd left my OS maps at home, which was a mistake), but we managed to find Burnthouse Lane and followed it along to the end where it widened out into space for a few cars to park. A footpath headed over the A11 to another set of ponds, but as we were only making a brief stop we headed east along another footpath and then through a gap in the hedge. A clearing opened out in front of us, with a very nice pond at the end. Amongst the pondweed there were lots of Bladderwort flowers on red stalks out of the water. Four-spotted Chasers and several damselfly species were also numerous. Having taken photos of the Bladderwort and Bogbean, we also noticed some fish with red fins (we think they were Rudd) close to the surface, and a Buzzard flew over. Once you blocked the traffic noise out it was a nice little reserve, which I shall endeavour to visit again at some point to look around properly. 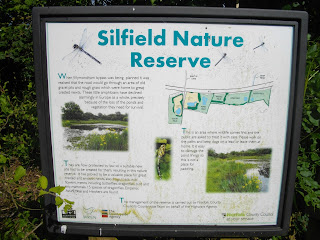 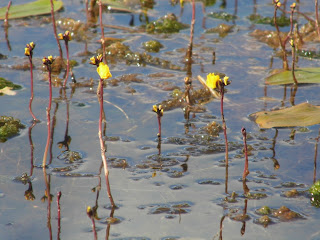 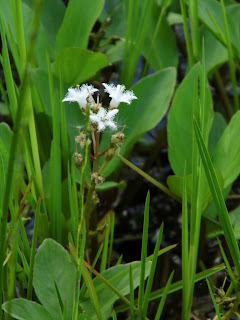