In recent weeks there have been quite a few Hummingbird Hawk Moths seen in gardens across Norfolk, quite often nectaring on Red Valerian. We have some Red Valerian in the back garden, so quite often in the morning whilst waiting for the kettle to boil I look out of the window checking for hawk moths. On Sunday morning I was looking out of the window, not seeing Hummingbird Hawk Moths, when a Little Egret flew over the garden. I'm only about half a mile from the River Yare, but as the bit inbetween is mostly houses it was not only unexpected but also the first time in I've got Little Egret on a garden list for any house I've lived in.

Having been out doing non-wildlife related activities we returned to the house late evening to find a small black ladybird on the door frame. Common species like Harlequin and 2-spot Ladybird have black forms, but based on the size and also the shape (it was rounder than the commoner ladybirds) this one looked different. Ladybirds are quite a distinctive group, and they also have a very efficient recording society. Cathy had the free iRecord Ladybirds app on her iPad, and flicking through the species guide she soon identified it as a Pine Ladybird. Having checked the features (small size, round body, ridge around the edge, two red comma shaped markings and two red dots) I agreed, and found that it was a new species for me. I sent the record to the UK ladybird survey via iRecord, and the record was verified a couple of days later. 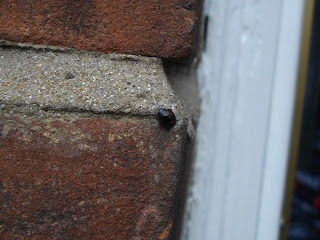 Email ThisBlogThis!Share to TwitterShare to FacebookShare to Pinterest
Labels: Ladybirds