One of my target species for the past couple of years has been Frog Orchid, a rather unassuming greenish plant that has only one East Anglian site, a meadow in Suffolk. I had planned a visit with dad, but I was not confident of success. Orchid flowering times vary year on year, and a friend had visited earlier in the week and not seen any Frog Orchids. When I mentioned I was going to another orchid enthusiast he said "couple of weeks early maybe" and finally of course we actually had to find them amongst the vegetation.

On our way we made a brief stop to look for Bee Orchids, but didn't see any. They are out at some sites, so I put this down to bad luck and we carried on. Finding our target site, Wink's Meadow, also took a bit of doing. The site is small, in fact it is a tiny natural oasis amongst a sea of agricultural land, and accordingly it wasn't signposted from anywhere, keeping us guessing right up to our arrival when we passed the entrance board.

One of the reasons for coming, even if the Frog Orchids weren't flowering, was to see another orchid that grows here in large numbers, Green-winged Orchid. I had seen them before, but not seen the 'alba' variety, which has none of the pinky-purple colour, giving flowers that are white with the green streaks. We soon found several of these, along with many paler plants with largely white flowers but some pink markings. Many were going over, but there were enough plants to find some fresher ones. Dad spotted some Adder's Tongue ferns, unusual plants that resemble mini Cuckoo Pint. 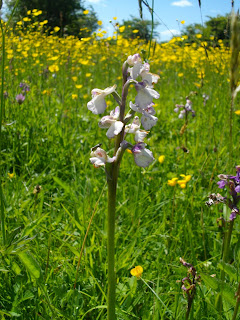 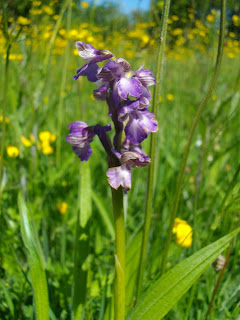 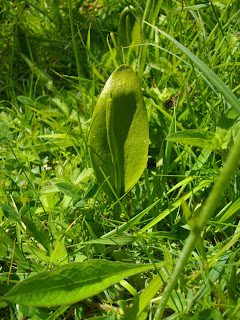 Eventually (and to my delight) I did find three Frog Orchid flower spikes. Two completely out and one with flowers at the bottom out and the rest in bud. Frog Orchids vary in colour from green to a dark red, but most flowers are somewhere in between. Interestingly the first one I found had a reddish hood but green lip, whilst the second two were reversed with a green hood and reddish lip. Thanks to those (particularly Dave & Chris) who gave me information about this site. 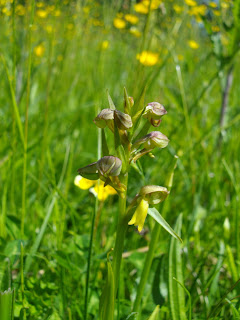 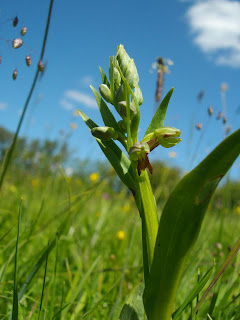 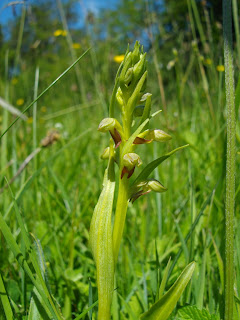