As I had a busy weekend planned I went down to Whitlingham on Friday evening to complete June's wildfowl count. A lone Mute Swan, a heard-only Moorhen and four sleeping Mallard were the only birds on the Little Broad, although I paused to check out a quiet Reed Warbler amongst the Alders, which didn't seem to be anything rarer.

It was a different scenario near the slipway on the Great Broad, where someone feeding the geese brought in a large proportion of the 177 Greylag and 44 Canada Geese present. Packed together they moved like a swarm of insects towards the food, although my description of them as a 'swarm' appeared to envoke a polite rebuke from a gentleman on Twitter. Lest any readers think the same, humour can be difficult to convey online, but in the majority of cases when I use a word out of its original context it is deliberate and used to convey an impression of my experience, rather than just a mistake. A pair of Mute Swans had one cygnet, there was no sign of any of the other nesting pairs. Three Common Terns screeched noisily back and forth, and one of the local Oystercatchers flew over. Sixteen Tufted Ducks remain.

I had heard that Bee Orchids had appeared in the picnic meadow last year, so I made a brief diversion to have a look for them. Not only are Bee Orchids lovely plants to look at, there are also several different variations that can sometimes turn up amongst the regular plants. Two in particular that I have never seen are the yellow-flowered form 'ochroleuca' and a pointed form 'trollii', sometimes called Wasp Orchid. I am still to see both, as I couldn't find any Bee Orchids at all. Whether I was looking in the wrong place or they haven't emerged I'm not sure.

Of course no time in a wildflower meadow is wasted if you are a naturalist. Having recently written a short guide to the plant galls found at Whitlingham (you can download it from my 'species guides' page, along with several other guides - I will add more over time) I was pleased to see a gall on Lime leaves that has been recorded previously but I hadn't seen. It takes the form of green or reddish 'pustules' on the upper surface of the leaf. 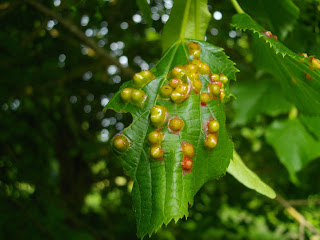 I was equally pleased to see a female Black-tailed Skimmer dragonfly on the meadow. The males used to be very numerous holding terrritory along the south shore of the Great Broad, but seem to have declined in recent years. I saw a number of different grasses, all of which I am ill-equipped to identify but will make the effort at some point. Other interesting sites included a Green Carpet moth, the hoverfly Eristalis arbustorum, the Soldier beetle Cantharis nigricans and what I think are young Common Green Capsid bugs. 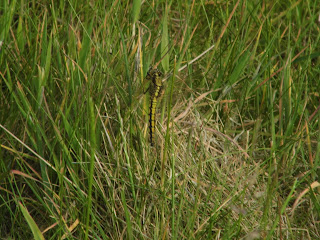 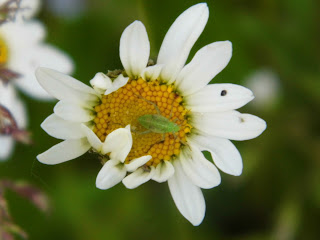