Most of the time that I'm at Whitlingham I am on my own, so Saturday was a bit of a change as I was there a walk around the Great Broad for Anne Crotty's birthday, along with about 20 others. Anne is a fellow member of the Norfolk Fungus Study Group, so there were a few other mycologists within the group and I was hoping that despite the time of year we might turn up a couple of interesting species.

I arrived a bit early so that before meeting up I could have a look for an interesting hybrid duck that Justin had found in the week. The bird in question was a drake Pintail x Mallard, quite an unusual hybrid. I located it with Mallards along the south shore of the Great Broad, but it frustratingly it kept fairly close to the shore, where views are obscurred by the ditchside vegetation. It was also rather nippy when it did swim, meaning I only got one in focus and three out-of-focus shots of it before having to head off. I also had a brief chat with Rich Moores before I headed to the car park. 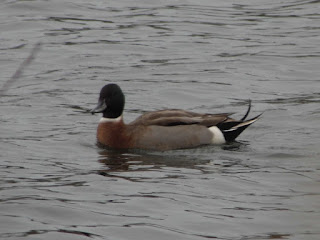 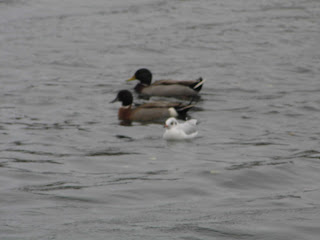 As many of the group were not particularly interested in fungi we didn't dawdle too much, but we did manage to record a couple of interesting species. I found a Peppery Roundhead (Stropharia pseudocyanea) which is a patch tick for me, and Stephen found a Crepidotus sp that has been taken for checking but looks like it could be Crepidotus luteolus, which would be something like the 5th Norfolk record and a site first. After the walk we headed back to Anne's house for tea and cake, and whilst there she showed us another interesting fungus, Hohenbuehelia astrocaerulea, which had grown on a tree in her garden. 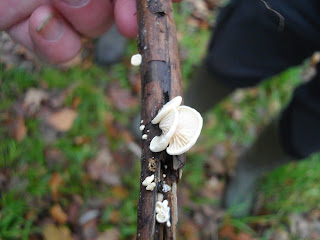 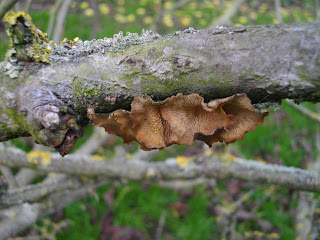 Dried out specimens of Hohenbuehelia astrocaerulea
Posted by James Emerson