Whilst looking at some local wildlife blogs recently I noticed a post on Sean's blog (The Autistic Naturalist) that mentioned a bracket fungus potentially new to Norfolk that had been found at Mousehold Heath. The fungus in question was Plicatura crispa, a small fleshy bracket with folds underneath instead of gills or pores. Finding the one tree that it was going on was always going to be a bit tricky, but Sean kindly gave me directions to the right area, so when I had a bit of free time on Wednesday I headed up to the heath.

Arriving at Mousehold I headed past Zak's and into a small clearing, where I stopped to watch three Goldcrests flitting through the trees. I headed down a steep path until I had nearly reached the bottom of a valley in front of me. I knew that the Plicatura was growing on a tree trunk that also had a Stereum sp. on, and I found a likely looking tree with Stereum and some gone-over small brackets. I assumed this was the right place and that I was just a bit late, but having compared photos of this tree to the one on Sean's blog it seems likely that I was just in the wrong place.

Whilst I was there I had a look around the heath, seeing some common fungi. I then spotted some interesting small bracket-types growing on the end of a birch log. They were gilled underneath, with cross-veins between the gills, which is a fairly uncommon feature. I got it down to a couple of families, and a helpful person from the British Mycological Society identified it as Bitter Oysterling, Panellus stipticus. This species, which is more common on Oak, was new for me, although it has been found on Mousehold before, in 1980! 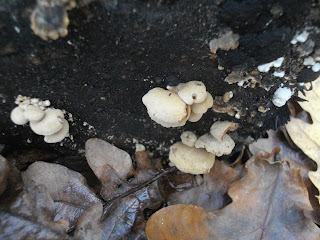 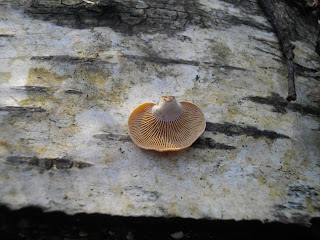 I did see another rather interesting thing whilst poking about. I struggle to identify Dryopteris ferns, and so when I saw a Male Fern sp. I took a closer look to see if it was Male Fern/Scaly Male Fern/Golden Scaly Male Fern. In doing so I turned over some fronds and found loads of bugs huddling together in groups. I was able to identify them as Birch Catkin Bugs. Rather odd to see them on ferns, but there were lots of Birch trees nearby, so presumably they are overwintering amongst the ferns. 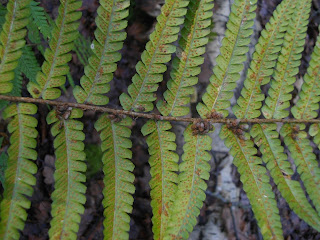