Having finished work for Christmas, I decided to head to west Norfolk for a bird & fungus twitch. My first target was the long-staying Pallid Harrier. I hadn't gone whilst it was at Snettisham, so I headed to Flitcham Abbey Farm in the knowledge that its appearances there were rather erratic. There were two birders already in the hide, having diverted on their way to a football match (presumably Manchester City v Arsenal).

The birders had yet to see any harriers during their vigil, and another hour went by until a ringtail Harrier sp. flew quickly over the scrub to the left of the hide. It was too fast to get the telescope on, so we ran out and onto the road to try and pick it up again. As luck would have it the bird had landed in the field opposite, but saw us before we saw it and flew back over the road. Cautiously optimistic we returned to the hide, joined by another birder, and the Harrier once again flew up, this time soaring and showing side on. It was a Hen Harrier. It was nice to get good views of a bird I usually see at distance, but still a bit of a disappointment given what I was hoping to see. I gave it a bit longer, but with no other harriers and rain starting to fall, I left for the second half of my day.

My second target was a rare fungus called Poronia punctata. It is one of two small 'nail fungi' that grow on the very specific substrate of herbivore dung. I had failed to see the other one Poronia erici, which grows on Rabbit droppings, at Holme last year. This one grows on pony dung, and had recently been seen at Roydon Common/Grimston Warren. I had kindly been told about it by Rob, and it has since been the subject of an NWT blog post.

I arrived at Roydon and the rain and wind had strengthened. I had never been to the Grimston part of the reserve, but the map assured me that there was one long path that would take me to Sandy Lane, the boundary between the two areas. Accordingly I followed the path along the western edge of Roydon, which became a wide track. I followed it all the way up to the end, where it finished at a pig farm. By now I was a bit wet and grumpy, so rather than wander across the open areas in the hope I would end up in the right area I decided it was best to head back to Roydon, where I had seen some ponies. It turns out that instead of following the path, I should have turned off through a gate and across a sort of field area towards a folly. The map on the information board, a term I'm using loosely, didn't make that clear! 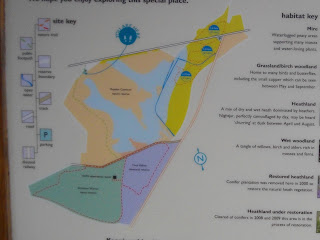 I walked a couple of paths fairly near the ponies to look for piles of dung, before my basic knowledge of animal behaviour rose to the fore and I went to check out some Hawthorns that I thought they may use as scratching posts. This was correct, and I found quite a few piles of dung of different ages. Despite looking closely at them, I didn't find any nail fungi. There was some other fungi about, including some small orangey spindles (possibly Apricot Club), and Earthtongue sp. and Blushing Bracket. The latter is very common but usually grows on willow, whilst here it was on birch. 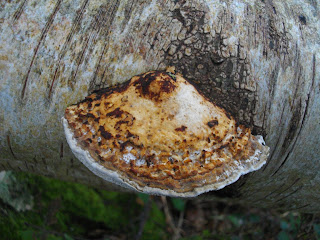 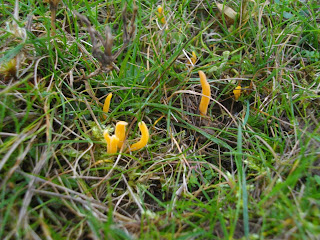