NORWICH: Back to Mousehold Heath

The last day of the year, and having dropped Cathy off in the city I carried on round and went to Mousehold Heath again. Having ascertained that I was in the wrong place when I looked before, I headed a bit further along the slope, searching birch trees as I went, and this time found the tree that had Plicatura crispa growing on (alongside Hairy Curtain Crust, Stereum hirsutum). The brackets were old, but still recognisable, including the gill-like folds underneath. Whilst looking at the fungi I could hear Goldcrests calling, and I picked out the sound of a Treecreeper moving through the trees with them. After checking a few birds I found the Treecreeper, and watching it spiralling up a nearby birch, which was a nice end to the years wildlife watching. 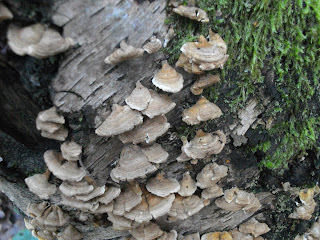 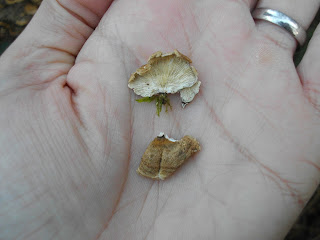