Today was the final WeBS date of the year, so it was off to Whitlingham to carry out December's wildfowl count. Carol & Rob had asked to come along so I met them at the start of the path down to the Little Broad. There was still a bit of mist hanging over the trees, and I stopped on the way along to photograph some lichens growing on the curb - still to be identified. 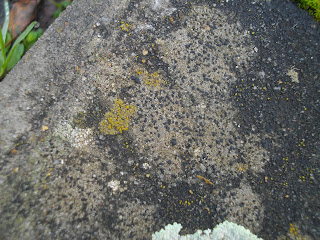 We walked along the edge of the Little Broad, stopping to watch a small flock of Siskins fly over and a Kingfisher zoom past. A Grey Heron squawked as it flew across the broad. Transferring to the Great Broad we stopped near the ruin to get some more photographs of the Pintail x Mallard hybrid, which was still sticking to that small length of broad edge. 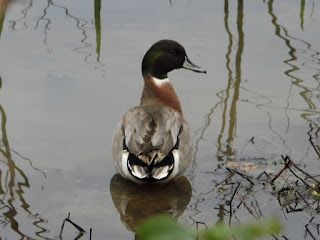 There were lots of birds on the broad, including the most Coot I've seen here this year (264). Two drake Goosanders were along the far shore but still visible with the naked eye (earlier in the day an extra one had been seen). The most interestingly from the counts was the large number of Grey Herons. We counted seven on the Great Broad, although one was probably the one from the Little Broad. There was another at Thorpe, making eight in total, two more than my previous highest count here. The combined Whitlingham/Thorpe duck counts were 87 Mallard, 106 Gadwall, 198 Tufted Ducks, 48 Pochard and 42 Teal. A Little Grebe, two Lapwing and another Kingfisher were also of note. 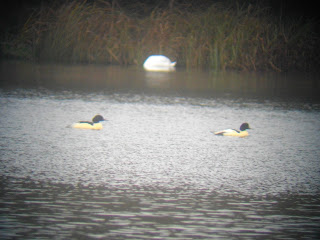