On Saturday I popped down to Thorpe Marsh to look for some Bearded Tits that had been heard in the small reedbed on the previous day. After crossing the railway I decided to check some Cow Parsley for the leaf mine of Phytomyza chaerophylli, a common but overlooked species which I found in the first patch I checked. 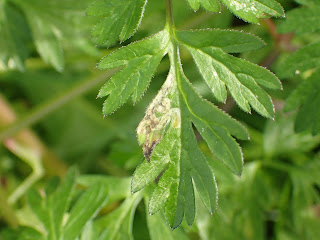 Heading round towards the marsh I stopped near the reeds and listened for a while, but there was no sign of any Bearded Tits. It was rather windy, so I wasn't surprised not to see them. Whilst on my vigil I kept an eye on birds moving along the tall trees near the railway line. A flock of Fieldfares flew west, and a large Goldfinch flock with a scattering of Siskins were feeding in the Alders.

After a while I gave up and moved off, checking the flood and marsh before moving on to the broad. There were loads of ducks, including around 160 Tufted Duck and the returning Pochard x Ferruginous Duck. 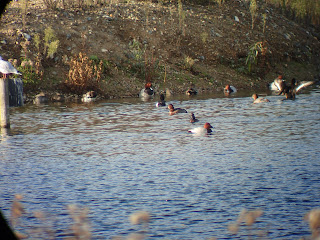 On my way back it struck me that I couldn't recall any apple trees at Whitlingham, so I should check the crab apple near the mooring basin. This was a good idea, as I noticed some old mines of Apple Leaf-miner moth, Lyonetia clerkella. 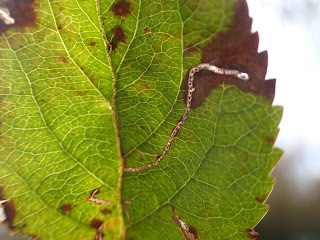