On Sunday I decided to forego the extra hour in bed caused by putting the clocks back and head once again to Whitlingham before dawn to look for migrating birds. It was a slow start with not much on the move, although I was pleased that the wind was still mostly westerly as the forecast strong northerly winds would have probably held most of the birds up.

Around dawn I saw Gary approaching. He asked me if I had seen the Hawfinch that flew out of the willows behind me and across the little broad a few minutes earlier. Ha ha I thought, until I realised that he wasn't joking. Even worse, I had seen a finch or bunting fly across as I scanned round, but as I hadn't heard it call I hadn't thought about it. Gary said that it hadn't flown high, so it might still be around, leaving me torn as to whether to stay and listen for passing birds or to try to relocate his Hawfinch.

Gary then set off for a walk around the site, starting with the south side of the Little Broad, so I stayed at my watchpoint for a bit. With just a few Redwings and Siskin flying over I decided that the best thing to do would be to check out the trees between the Little Broad and the river. After ten minutes or so I was rewarded as a Hawfinch called and I managed to pick it up as it flew off across the Little Broad. It had presumably been perched unseen in one of the trees nearby.

Filled with a mixture of delight and relief I decided to try to see if the Hawfinch had landed again. With no sign of it along the Little Broad I carried back along Whitlingham Lane, checking out the isolated trees in the grassland to the west of the broad, then on to Trowse Meadow. Here I encountered a problem, notably the river had burst its banks and flooded the meadow. There was no way I was going onto the meadow without wellies, so I headed back to the country park. 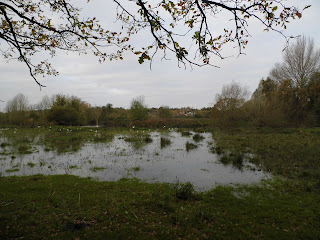 I decided to have another 20 minutes or so of migration watching before heading home, and had only been sat down a few minutes when I got a text from Gary, telling me another Hawfinch had just flown west past the conservation area. I still had my phone out when it flew past, straight in front of me and slightly above the treeline. Before leaving I again checked out the trees along the river, where an obliging Twin-spot Centurion was resting. 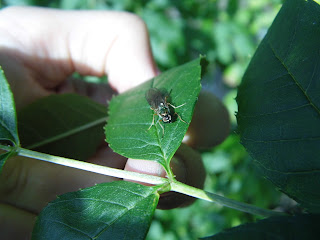