Time for the November WeBS count, and I was hoping to catch up with a Goldeneye, knowing that there had been up to three earlier in the week. I arrived to a country park split in half, partly bathed in warm sunshine and partly in shadow with glistening frost.

The broads had good numbers of ducks, but not much in the way of variety. Combined Little Broad/Great Broad/Thorpe Broad counts included:

As you can see from the figures below Tufted Duck numbers are much higher than last year, but Coot numbers are down (although similar to 2015). The undoubted highlight of my visit was watching two Kingfishers chasing each other in the sunshine, always a pleasure to see them. On the river the local Muscovy has cruising back and forth, and the Mallard x Pintail hybrid was on the Great Broad. 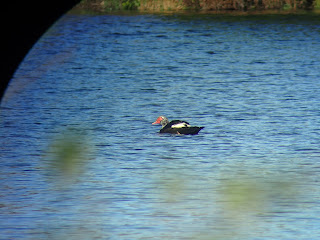