On Sunday I attended the second of two fungus-themed Friends of Earlham Cemetery walks. Despite visiting in autumn over a number of years these walks continue to provide things of interest - even Ian who visits very regularly still finds new species on almost every visit! Our group was swelled by several members of the fungus study group, with Steve and Gill making their first visit and David also in attendance.

Our aim was to go across to the Farrow Road section of the cemetery, but obviously we stopped quite a bit on the way as we came across various fungi. A small group of Glutinous Earthtongues were pointed out, one of two species (along with Hairy Earthtongue) that can be identified in the field. Other species nearby included Deceiver, Fragrant Funnel, Butter Cap and Wood Blewit. We stopped a bit further along to look at a good crop of Purple Jelly Discs growing on a cut stump. 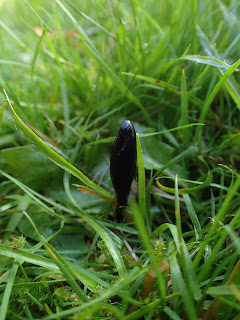 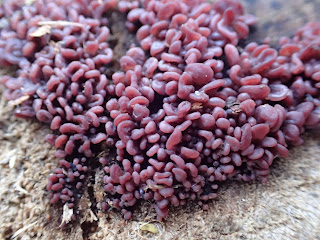 Further along we had a look at one of several productive bits of short grassland where we saw Geoglossum umbratile, Snowy Waxcap and some Pinkgills. Nearby we checked on the Striated Earthstars, where one fresh one was growing near some older fruiting bodies. We also had a debate about the smell of a brown fungus with a yellow edge. Ian and I felt it was Cucumber Cap, but others felt the smell was more rubbery. In the end I took one and after staining a section I easily found the large triangular cystidia that give this species it's generic name, Macrocystidia. 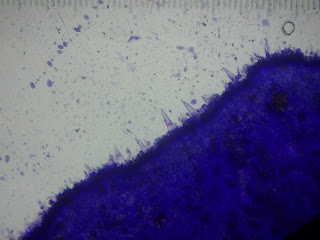 Finally reaching the far part of the cemetery we stopped to admire a 'fairy ring' of Field Blewits. My photos don't do them justice, they have a rather dull buffish cap but a very noticeable (in the field at least) purple stem. Grey Knight, Meadow Coral and Wrinkled Clubs were all seen, followed by Agaricus langei, confirmed later by Steve. 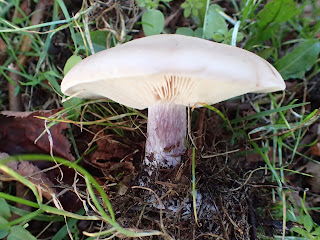 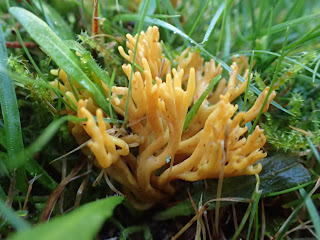 It was already beginning to get dark by the time we reached the far end of the cemetery, and looking into the long grass we saw a Hedgehog running about! It is getting late in the year for them, but this one seemed a good size and was foraging for food so we let it carry on (I'm aware that in some school of thought we should have picked it up and weighed it, but we didn't feel that was necessary in this case). 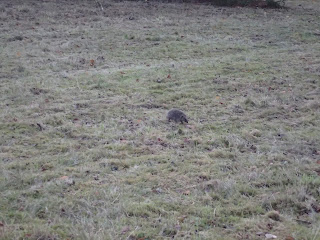 As the light faded further, as well as the knowledge that the gates would be locked fairly soon, we headed back via a scarce inkcap that Ian had found the previous day. It was quite a distinctive species, Coprinus impatiens, so I was glad we managed to see it before leaving. I also noticed some London Plane trees so checked for London Midget moth leaf mines and found some, the first records from this tetrad for 13 years. 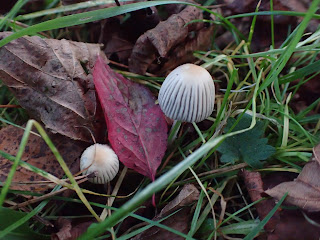 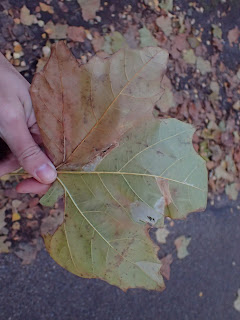 Thanks to Ian as always for leading the walk.