On Thursday evening there was a bat evening at Whitlingham, organised by the Norwich Bat Group and Broads Authority. This was intended to be the 'adults' version following a childrens one in August, but as it happened a group of children were accommodated on this walk too. After an introductory talk we were shown some rescue bats that are being kept by a licenced bat worker for educational purposes. 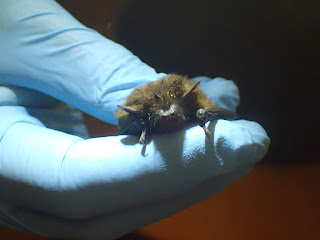 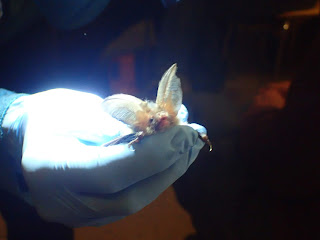 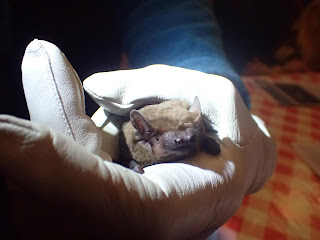 We left the barn a bit too late to see Noctules, but there was a lot of Soprano Pipistrelles about. The main reason for attending the event was the opportunity to see Nathusius's Pipistrelles being caught and ringed as part of a national project, so despite slightly inclement weather I was keen to visit the harp traps. Fortunately some other attendees also wanted to have a look, and we arrived just as two bats were ready to be processed. I had seen Nathusius's Pipistrelles here in fight before, but it was very interesting to see them in the hand and the various checks to make sure the in-hand ID was correct.

Thanks to all those involved with an interesting evening.
Posted by James Emerson