When the Norfolk Fungus Study Group programme for the year had been finalised, the foray at Grimes Graves had stood out as one that I wanted to attend. Despite the name this pitted chalky grassland was originally formed by chalk mining rather than ancient burials (although there were some burials later on I believe), and I had hoped for lots of interesting grassland fungi. It was probably the hot summer that kiboshed this, with a rather disappointing tally of mostly weedy specimens found. The exception being a 'fairy ring' of massive Giant Funnels. In fact the group did find a few rare Parasola spp too, but I didn't see them as I did fancy forcing my way through some (possibly) tick-infested Bracken. 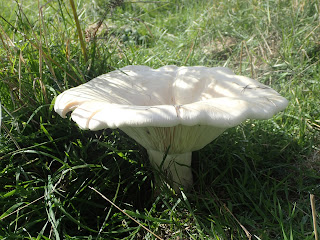 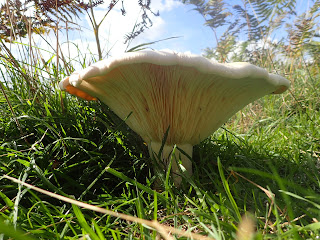 Of the grassland fungi we did see, the highlights were probably Honey Waxcap and Common Bird's-nest Fungus. 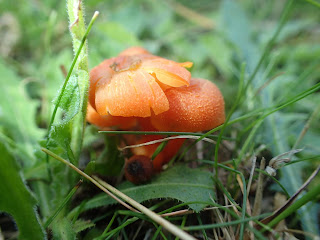 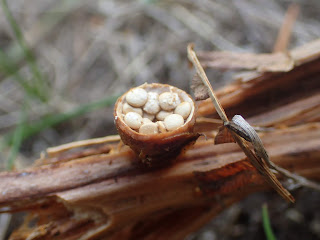 I did see a few new bits, most noticeably a purplish flowered Eyebright, Euphrasia micrantha, identified by ace botanist Alex Prendergast, and a sort of horn-backed spider, Gibberanea gibbosa swept by Tim. A tent canopy under which some survivalist-types were skinning and cooking a deer added to the slightly surreal atmosphere as we ate our lunch. 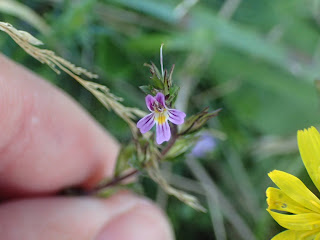 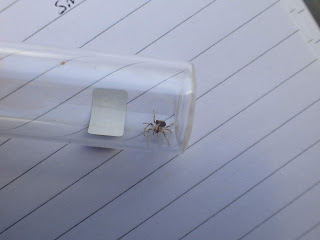