As Christmas approached I tried to make sure that I got out for a little bit of a walk when possible. One one day I took a circuitous route into the city to follow the river. A few days previously a seal had been seen from one of the bridges at Riverside, presumably the same seal that had reached the city centre in November. I walked as far as the path allowed just past Carrow Bridge, but there was no sign of the seal. A couple of Grey Wagtails and an Egyptian Goose were the only birds of note.

On another day I dropped Cathy & Rose off and stopped at a nearby cut stump. This stump has an amazing display of fungi on - mostly the fairly scarce Hairy Bracket (Trametes hirsuta), but also Splitgill (Schizophyllum commune), Giant Polypore (Meripilus giganteus) and Turkeytail (Trametes versicolor). 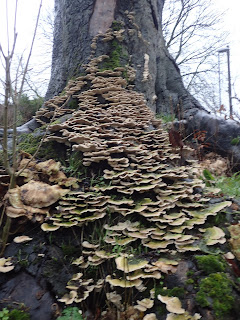 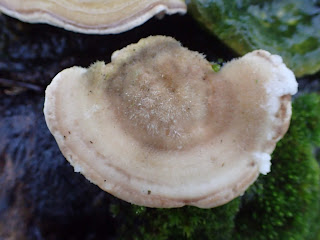 On Christmas Eve I called in at Whitlingham for a brief look around in the rain. The broad hadn't been disturbed by boating so there was a nice spread of the same species seen on the recent WeBS count, but nothing new and no sign of that dimension hopping Mandarin again. I had a quick poke around in the nearby scrub and noted Stigmella aurella mines on Wood Avens, plus a nice pattern of lichens on some tree bark, made up of Lecidella eleachroma, Lecanora chlarotera and another one that might be Arthonia radiata (or something similar). 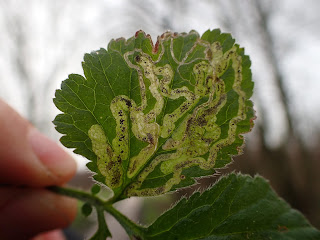 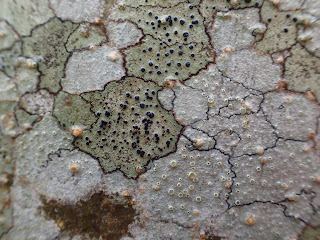 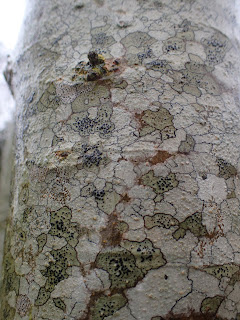