It was the day after Boxing Day, and I had spent the morning watching Paddington 2 on repeat with my daughter. I temporarily distracted myself by having a look through some of the books I'd got for Christmas, and picked up Dung Heaps of Eastern England volume 2. I was concerned that I wouldn't be able to pick up the story having never read volume 1, but it was quite straightforward. 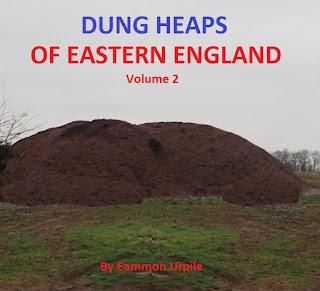 Apparently one of the most impressive dung heaps in Norfolk was at Sedgeford, a village near Docking in West Norfolk, so I decided to set out after lunch to have a look. The sky was a uniform grey - in fact it seemed like the sun had risen a few degrees above the horizon and then given up, like some post Christmas apocalypse was imminent. At least it wasn't raining, and I arrived at Sedgeford in exactly the same overcast conditions. Finding the dung heap was simple as a small gathering of fellow manure enthusiasts had already got it under observation. 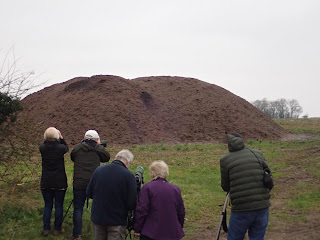 Whilst there I thought it would be a good idea to make note of any wildlife around, and by happy coincidence what should be accepted as Norfolk's first Eastern Yellow Wagtail (Motacilla tschutschensis) was feeding on the heap. This species has probably occurred in Norfolk previously, but the relatively recent promotion to full species and recent work on ID mean that this is likely to be the first record to go past the records committee, even if others are accepted retrospectively. 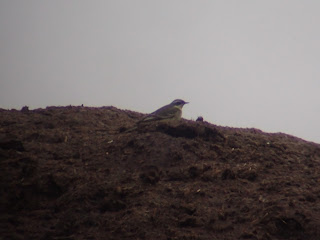 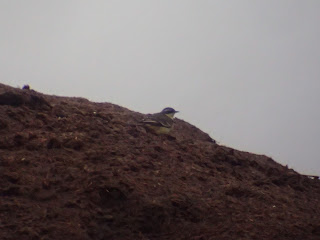 You could be forgiven for not having heard of Eastern Yellow Wagtail, indeed it won't be in many field guides. There are currently four subspecies - as a male this one has been identified as the nominate race, Motacilla tschutschensis ssp tschutschensis, which is pronounced in a similar way to having a series of sneezes. Naturally rather than leave it at this people are eager to give it an English name. Blue-headed Eastern Yellow Wagtail has been suggested, but this seems overly long and invites confusion with Blue-headed (Western Yellow) Wagtail. Now it appears most people are going with Alaskan Wagtail, but Alaska is a relatively small part of its range, and on a standard map it would actually be classed as west of the UK not east. In case you were wondering who decided on the name Alaskan Wagtail, it would appear some Dutch birders popularised it, although it isn't clear from the paper if they just made it up or got it from somewhere else. Anyway, nice bird, nice dung heap.