The story of an unusual fungus found at Earlham Cemetery by Ian Senior is both complicated and incomplete, so I will only present a summary here. In November Ian found a Lepista-type fungus (the family that Wood Blewit is currently in) with a very odd bubbly surface. I hadn't seen anything that resembled the pictures so was of no help, but other people did suggest that it might be caused by a parasitic fungus. A small piece was taken by Tony Leech, who was able to identify the host fungus as Lepista ovispora, a scarce species in itself. It appeared that there was indeed a second fungus present, but an attempt to extract DNA was unsuccessful. Meanwhile, a similar 'bubbly' fungus was found at Ashwellthorpe Lower Wood. This did yield DNA, and there was a match with a parasitic fungus barcoded in the USA. It seems very likely that this is the same fungus Ian found.

Anyway, a normal fungus would have probably rotted away by now, but the infection had turned this one to a solid jelly-like consistency and it was still present. I decided to have a look, but didn't find it at first look. I therefore met up with Ian on his lunch break so that he could show me the fungus, definitely passed its best but still very interesting. 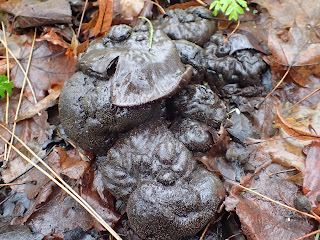 Afterwards Ian also pointed out a handful of other interesting things that he had seen recently, including a couple of small orange cup fungi and Greening Coral (Ramaria abietina). I also recorded a new Agromyzid, Phytomyza autumnalis, in Common Knapweed. 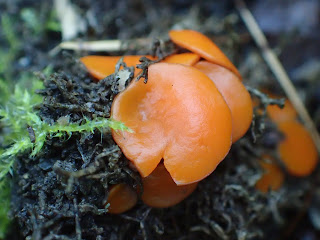 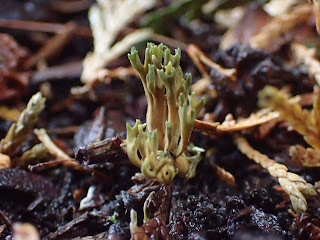 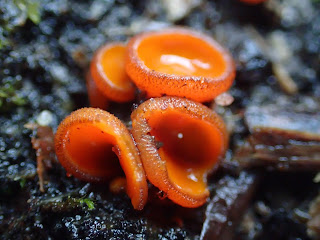 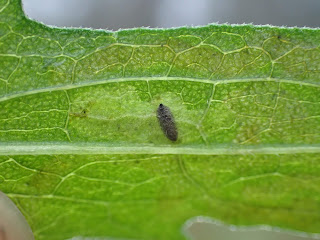