On Sunday afternoon we went for a stroll along the dunes at Horsey, keeping an eye on the sky in case any Pacific Swifts should appear. Straight away we saw butterflies galore from the carpark, a couple of Dark Green Fritillaries and several Essex Skippers being year ticks. Further along it seemed that most of the skippers were Small, and a steady stream of fritillaries sailed past but refused to settle for photographs. There was a slightly embarrassing incident further on when I thought I'd found one settled on the ground and crawled up to it on my stomach before finding that it was dead. To be fair it was partly covered in ants (eating it or working out how to take it to their nest maybe?), which meant that it was moving slightly. 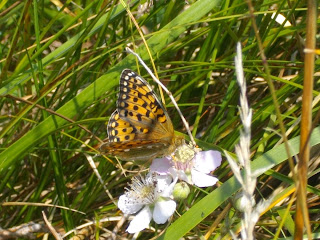 Best of a bad bunch 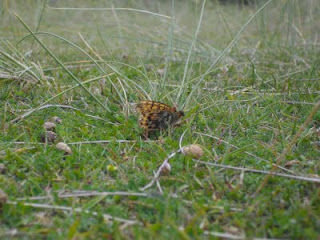 It looked less dead from further away

I pointed out a couple of Stonechats "chatted" on the fence, prompting Cathy to remark "I'd almost forgot you were a birdwatcher". Maybe too much time spent on butterflies. Looking out at the sea a few Grey Seals were loafing just offshore, whilst a Common Tern with a seemingly rather darker grey back than normal held my attention for a bit. Other than that it was rather quiet birdwise.

In the evening we went out for another drive around the villages and fields south and east of Norwich. Best birds were six Yellowhammers and a Little Owl. The crops are getting closer to being cut, but hopefully this won't happen for another couple of weeks. I like the idea of watching whilst some fields are being cut to look for Quails being flushed, although it is probably still needle-in-a-haystack time, even if I pick a field that has some! If anyone has had luck seeing Quail at harvest time I would be interested to hear your experiences, either via comments or email.