Cathy & I joined Peter Walton, Albert & Robin from the Broads Authority, a member of the Norwich Bat Group and three others for the annual Whitlingham Bat & Moth Night. After the introduction and a look at a selection of moths caught recently we left for a walk around the broad to find some emerging bats. I picked up a couple of Noctules flying over Thorpe, but they were barely visible to the naked eye. We stood and watched a number of Soprano Pipistrelles hunting amongst he alders, before walking towards the outdoor activities centre and got great views of four Noctules hunting over us. If you haven't heard bats using a bat detector I highly recommend it, the "raspberry" noises they make as they catch a moth never ceases to amuse me. 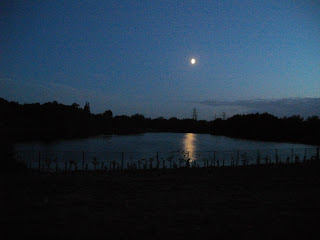 Heading back to the moth trap we found that as suspected the bright moon and cloudless sky was going to adversely affect our catch. We managed 16 species, including July Highflier, Ruby Tiger and several Dun-bars, but the best moth of the catch took a bit of identifying. In the end it was Cathy who took the book, diligently searched through and then gleefully announced she had it - a smart looking Dusky Sallow. We also have an interesting species pending, having detected a possible Nathusius' Pipistrelle around the trap. This could be the first record for the area, and will need a follow-up visit to take sound recordings.
Posted by James Emerson