A lay in after last nights mothing meant not going too far, so I decided to go back to Whitlingham for another walk round. A group of 20-odd Egyptian Geese at the west end of the Great Broad convinced me it would be a goo idea to count them, and indeed it was, with another record-breaking count of 86. The greylags were 100 short of last weeks count, but the three hybrids (presumed Red-breasted x Barnacle, Lesser White-fronted x Ross' and Greylag x Canada) were all still present. Two Common Terns were flying around the broad, and a couple of Linnets flew over.

It became apparent from the first Buddleia that there were a large number of Red Admirals present. I counted over 40, but there were probably many more! I also saw my first Gatekeepers of the year and was led a merry dance by a small skipper sp, which turned out to be Small Skipper, funnily enough. Dragonflies were present too, Black-tailed Skimmer, Brown Hawker, Emperor (including an ovipositing female) and a female Ruddy Darter. Loads of damselfies in the undergrowth, all Common Blue or teneral from the ones I looked at. Two boatloads of drunken grockles were harbingers of summer (or the apocalypse, I forget) but unwittingly put up a Grey Wagtail which flew across for my 99th patch bird of the year. Hopefully it won't be long until the 100th! 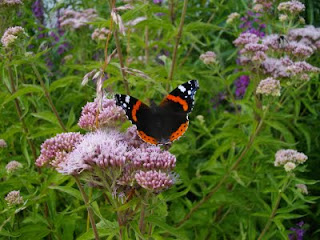