Following a fairly unproductive morning visit to the broads, Jim & I went for a look around the pools at Cantley Beet Factory. It was my first visit here, and the potential was apparent, even if the birds initially weren't. There wasn't that much mud exposed, so we concentrated on the margins, and managed to turn up two Wood Sandpipers, a Dunlin, a Ruff (possibly two) and several Green and Common Sandpipers. I see that 45 Green Sandpipers have been seen today (30th), is there a pit we missed or are they commuting between the pits and nearby fields? There was also a large number of Shelduck, including some young ones. 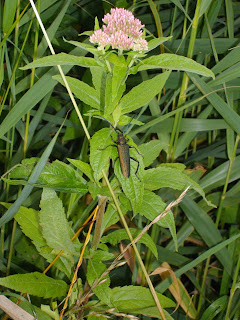 We saw three of these whopping longhorn-type beetles in the morning. I haven't had a proper look for it in books yet, but if you know what it is then do please comment. 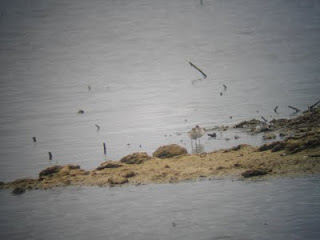 Wood Sands with bonus Dunlin. As soon as I got my camera out they refused to turn side on and show their nice spangly backs.
Posted by James Emerson