The recent Brown Argus sightings have brought up the unlikely scenario that I could see all 34 regular Norfolk butterflies in a year (I'm not counting Silver-washed Fritillary in that as it seems they are yet to establish themselves - I'd still like to see one though!). I reckon I'll bump into Grayling around Salthouse later in the summer, so Painted Lady seems to be the one I may struggle with as they seem very thin on the ground this year. Anyway, that left Purple Hairstreak to see, and luckily enough there are some at Mousehold Heath.

With the sun shining I started at Zak's, where a colony of PHs are meant to live on the central oak ("Turner's Oak"). With no sign there I went to investigate the myriad other oaks on the heath, finding Small Copper butterflies, Brown Hawker, Common Darter and Emperor dragonflies and a Common Lizard. Eventually I found a couple of Purple Hairstreaks, even getting a record shot of a tatty individual before it flew off. I then found another five around some oaks where I had seen them last year, and four more (2 and 2) near more oaks on my way back along the edge of the heath. I did fail in my secondary mission, to find Striped-winged Grasshoppers, which have apparently colonised in the last few years. I didn't actually put that much effort in, having seen that most of the ones I was kicking up (not literally) were Field Grasshoppers. 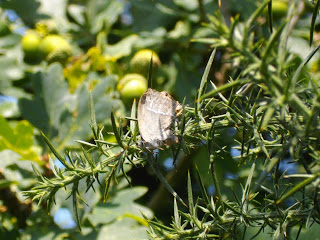