Ostensibly today was a series of historical visits, but we managed to pack in some birds too. We started at the ruined castle at Castle Acre. The site is free to visit and has some chalk flora such as Lesser Calamint to look at when not staring at the ruins or running backwards and forwards over the bridges. The landscape looks a bit like what the Teletubbies home would be like if they decided to fortify it. 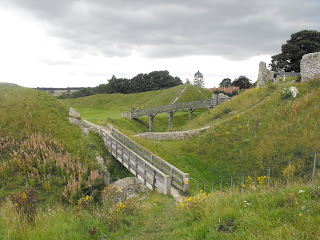 After visiting the castle, we went to Castle Acre Priory. Another English heritage site, this one charges admission, and it wa touch and go whether it was worth £5.60. However, as we were already there and it looked quite good, we went in. Straight away I located a calling Grey Wagtail, and we spent a while stalking at least three more amongst the ruins. We also saw a Great Spotted Woodpecker and Margaret found a couple of Little Owl feathers. 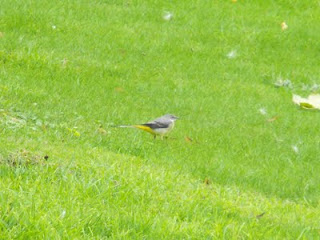 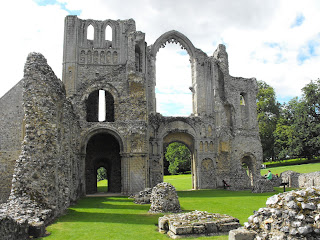 After Castle Acre, we briefly stopped at North Elmham Chapel, Norfolk's first Cathedral apparently, and a very small one. Driving back to the Fakenham Road we had just got to Guist Common when a stunning Harris Hawk flew alongside the car and then over the road. I think one has been kicking around that area for a few years, but it was my first experience of one in the 'wild' (I know its an escape). We stopped in case it flew back, and whilst waiting a Bullfinch flew into the hedge.
Posted by James Emerson