A warm morning was a mixed blessing, nice enough to go out but warm enough to bring hoardes of people to Whitlingham. Adam suggested a walk along the river south of the city, so we headed for Marston Marshes. The paths had been resurfaced since my last visit, but the riverside ones don't appear to have been raised, so its only a matter of time before they flood. The new wader scrape was similarly disappointing, both in size and the fact that it is almost invisible from the path. We saw Great Spotted Woodpecker and Kestrel, whilst a flock of House Sparrows were on the feeders on Marston Lane.

It began to drizzle as we crossed the railway to Eaton Common, stopping to watch a Green Woodpecker in the paddocks. A heard-only Kingfisher was the only bird of note here, and we headed off to Keswick Mill. Only a lone Moorhen on the mill pool, but in a sun-trap around the corner we saw a number of butterflies including a pristine Comma. We followed the track down to Harford Bridges, where we had a cup of tea and marvelled at the extensive Tesco Local Nature Reserve. walking back up the main road we were heckled by morons whilst photographing some Sandy Stilt Puffballs (a rare fungus) before heading back along Marston Lane. 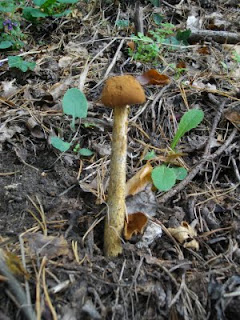