17th September 2011
A couple of weeks since my last visit, and with Grafham Water showing the potential of inland reservoirs (albeit much larger ones) I thought an early morning visit was in order. Upon arrival I was scanning from the slipway when I heard the whistling noise made by Wigeon, and sure enough six were swimming around near the far bank. As I continued round I found a further 37 mixed in with a similar sized flock of Gadwall. It wasn't long before the ducks were disturbed by a speedboat sent out by the watersports centre, but when they landed again I was able to confirm that there were 43 Wigeon, far and away my highest count here. In the conservation area bay another 25-odd Gadwall and a Little Grebe were loafing around. Three Chiffchaffs were singing around the site, and five Cetti's Warblers were singing too. A Speckled Wood and a couple of White sp. were the only butterflies, whilst a Shaggy Ink Cap was by the path at the east end. 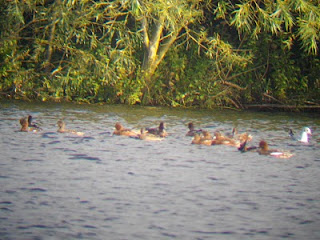 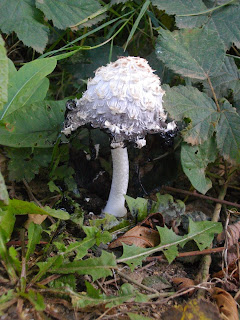