No prizes for guessing my destination on Saturday, with the juvenile Little Bittern at Titchwell defying a supposed period of inactivity resulting from the presistent westerly winds. It took two and a half hours of pool gazing before we got views, but it was worth the wait. A close Red Kite and a late Swift flew over. Everyone has their moments where a bird shows after they leave, and this was nearly mine. Cathy had waited patiently for a few hours and I had agreed to go after checking the freshmarsh, but on the way back I noticed everyone had bunched together. The Little Bittern had came into the open then back into the reeds (a nearby birder accurately described picking it out as a "Magic-eye puzzle") but I finally saw bits of it. After a short wait it then stepped out into the open again, looking straight towards us then turning side-on and catching a fish. Despite the reeds blowing about in front of me I managed to get a couple of digiscoped photos for posterity. 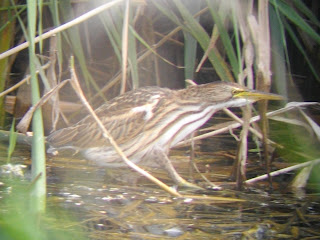 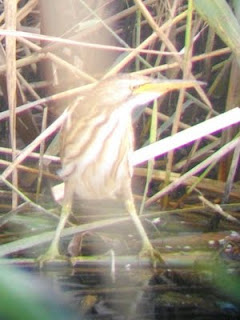