NORWICH: Students in not drinking shocker

It wouldn't have happened in my day. Anyway, it appears that someone on the UEA campus wasn't in the student bar, and as a result found a lone Snow Bunting wandering around on the grass outside some of the new accommodation blocks ('new' as in not Waveney Terrace/Prison). I found out about the bird when I got home from work (thanks to James G for the text) and after a cup of tea decided to walk down to UEA and see if it was still around. To my surprise it was, and was every bit as tame as Snow Bunting usually are at the coast. It was walking around, picking at white feathers and dandelion clocks as if to check that they weren't snow. Eventually it flew in a tight arc around two other birders, landing even closer to them on the next bit of lawn. Well done to the finder, and to any new birders starting uni here - its not always like this! 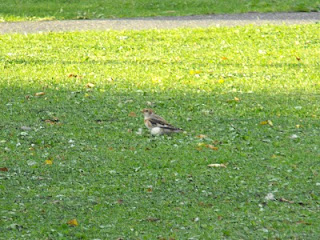