Jim had been seeing good numbers of waders at Cantley over the past week, and invited me to join him there for the afternoon. On the way we called in at Strumpshaw to look for the Willow Emerald Damselflies. We didn't see them, but as this is the third year they've been recorded at Strumpshaw I'm sure I'll catch up with them eventually. We did manage Common Blue Damselfly, Common Darter, Ruddy Darter, Brown Hawker and Migrant Hawker. From the reception hide a Hobby was perched on a dead tree and an immature Grey Heron was standing half-submerged, perhaps trying to cool off? Several Brimstones were flying, a rather late second brood.

After signing in at the security lodge we preceded down the footpath to the settling pools. On my previous visit to Cantley the water levels had been high, but it was immediately obvious from the large areas of exposed mud that I should expect more birds this time. Quietly viewing from the first corner we found a flock of Dunlin & Ringed Plover that also included 11 Little Stints and four Curlew Sandpipers. Eventually we walked alongside them, getting my closest views of both of the latter species. David N was already onsite, and we were joined by Ricky, creating a sort of 'bloggers-elect'. Most of the rest of the time was spent scrutinising each Ruff and Dunlin, but we also turned up Green Sandpiper, Common Sandpiper, Wood Sandpiper, Greenshank, Snipe, Yellow Wagtail and more Curlew Sands. Good views, good company, great birding. 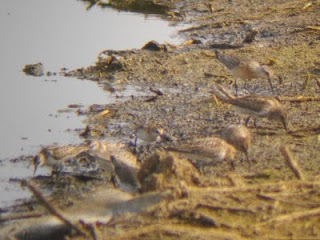 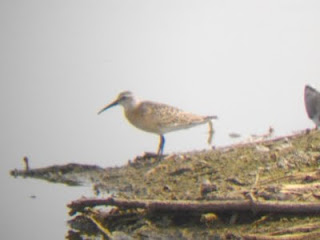