21st January 2012
Firstly many thanks to those who sent messages regarding the Ferruginous Duck.  As planned I got to Whitlingham on Saturday morning and soon got onto the bird, which was asleep on the edge of the main island on the Great Broad.  After a showery wait the Ferruginous Duck eventually took to the water, and at one point took off after something spooked the jittery Teal.  It landed slightly closer, and allowed views for another 15 minutes or so before flying off, this time away from the bay. 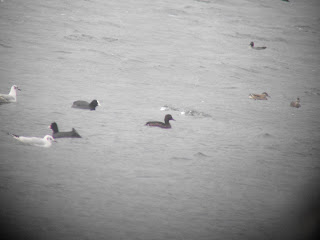 Also around were 250+ Teal, the Wigeon x Gadwall hybrid, the apparent female Pochard x Tufted Duck hybrid and a Snipe.

[Edit] If anyone has any photographs of this bird then I would be very interested to see them! I can be contacted via the email address on the right hand side of the blog. Thanks.
Posted by James Emerson