The last day of our whistle-stop tour of the south coast, and we headed out early to Portland Bill again in search of migrants.  Two flyover Lesser Redpoll were our only reward, so we began our journey back to Norfolk via Glamorgan to see the longstaying Lesser Scaup.

The Lesser Scaup was excellent for two reasons.  Firstly, the location.  Cosmeston Lakes CP was very Whitlingham-esque.  When we got there we found a large lake, with people canoeing along the back, and model yachters along the near side.  It was jammed full of people.  After walking along some boardwalk we came to the second lake, which was quieter and had some birds on it.  This is where the similarities end, as here they had made the second lake a conservation lake - at Whitlingham there is a very heavily used lake and a slightly less heavily used lake.  Anyway, the Lesser Scaup was visible from a viewing platform with a small group of Tufted Ducks.  This enabled us to get good views (I could even see some slight vermaculations on the white sides), and I am now confident that were one of these to turn up locally, I could not only ID it but justify my ID to a records committee!

Whilst at Cosmeston we also saw a Common Sandpiper, my first of the year, and then some Red Kites on the way home. 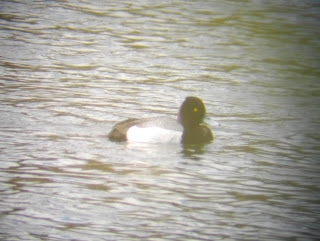