I decided to head down to Whitlingham early, to catch some of the dawn chorus and have a look round before the site got busy.  This paid off straight away, with views of my first patch Otter from the bridge at Trowse.  I walked along the misty meadows to try to locate it further along the river towards Whitlingham, but it wasn't visible looking back along the river.  Usually there are lots of canoeists around, even just after dawn, but today I had the place to myself.  On the Thorpe side of the river a young Fox came down to the river to drink. 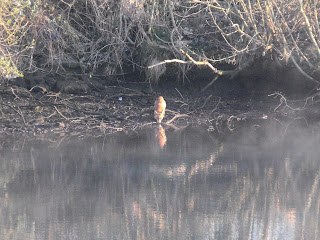 Further along I looked back across the broad to the visitors centre, noticing the new platform that has been put in to allow boat trips on the Solar boat Ra which is being moved here.  I can't say I welcome the added disturbance, but it will at least allow a ducks-eye view of the broad, which will help me when anticipating where certain species might occur. 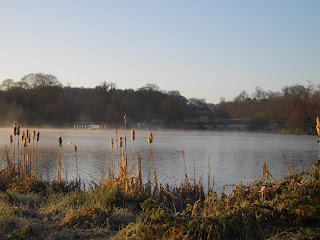 A singing Willow Warbler was the highlight in the conservation area.  No Garganey, but a lone Teal and two drake Shovelers were in the bay.  I headed up into the woods on the off chance that Adams Firecrests were still around, but there was still no sight or sound from them.  A female Bullfinch had joined Tuesdays male, lots of singing Blackcaps and Chiffchaffs and a pair of Goldcrests were calling.

I headed further down the lane, seeing two Oystercatchers at the sewage works.  On the fields between Whitlingham and Bramerton several Meadow Pipits and Reed Buntings were feeding, wilst the song of Skylarks filled the air.  A Red-legged Partridge ran across a field nearby, both of the latter birds would be patch ticks if it wasn't for the fact that I don't count birds this side of the sewage works.  Back at Whitlingham there was a brood of seven Egyptian Goslings, in addition to seven of last weeks (one has perished so far).  Eight Mallard ducklings were also recently hatched.