An early start had us at Portland Bill, where we were hoping for some migrants fresh in from the continent.  A number of Wheatears was a start, along with several Swallows flying through.  The local Rock Pipits were calling and feeding on the rocks below.  Most birders seemed to be sea-watching, so we had a quick look, and located typical species (Manx Shearwater, Razorbill, Guillemot etc).  Further round we were put onto a lone Puffin on the sea.  A calling Yellow Wagtail flew over unseen, and a Stonechat sat up on some gorse in the distance, but it was very quiet.  My first Sand Martins and House Martins of the year came in off the sea, and we got close up views of a Kestrel and more distant views of a Raven.

After breakfast we decided to try a high point overlooking the bay, and when this didn't work we had a look around one of the large abandoned quarries that is now a nature reserve, and a birdless one at that.  Of botanical interest was some dead looking Ivy Broomrape.  Getting no-where fast we decided to go somewhere where there were actually some birds, to remind us what they looked like.  I suggested Radipole in the hope of seeing that plastic Hooded Merganser that's been there ages.  As it turned out we couldn't even find that, but whilst there we did get great views of a Glossy Ibis, brief views of a Kingfisher and my first Reed Warbler of the year.  Cetti's Warblers were very showy here, we saw at least five.  Afterwards we headed back to Portland, and found nothing, again. 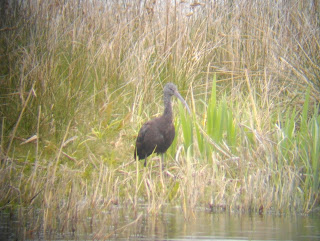 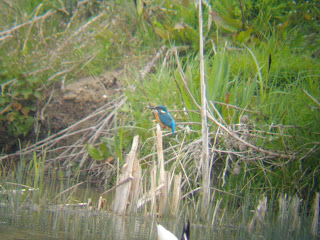