With no change in the weather looking likely, I bit the bullet and went down to Thorpe in the drizzle.  My main objective was to catch up with one of the Grasshopper Warblers that has been present for the past week, whilst a secondary target was Whimbrel, on account of a large gathering at Breydon recently.  I spent some time in the area just over the footbridge listening for Groppers, without success.  Several Sedge Warblers were audible, including a showy one in a small willow close by.  On the path a small blue egg with light speckling at one end had presumably fallen from a nest as it showed no signs of predators.  In the distance I heard a Reed Warbler sing briefly in the direction of the railway line. Having negotiated the flooded path near the gate, I saw that the entire scrape was now a pool, less wader habitat and more suitable for ducks, of which Gadwall and Teal were present.  Scanning the skies I noticed a dark falcon approaching.  I managed to get my binoculars on it and confirm my initial impression that it was a Hobby, but it showed no signs of stopping, carrying on north towards Thorpe road.  I've long expected to see Hobbies at Whitlingham, but this was my first here, and very pleasing it was too.

At the bird screen I scanned for waders, particularly a Common Sandpiper seen by Ricky midweek.  I soon located it, bobbing manically along what remained of the spit (mostly submerged by the high water level).  Further round I found another one on the exposed shingle part of the spit.  Finally I caught a burst of Grasshopper Warbler song, which I managed to track back to a patch of brambles along one of the ditches.  On my way back I met a local birder called Steve, who was able to tell me about the Grey Plovers seen here earlier in the year, before I headed for home to dry off. 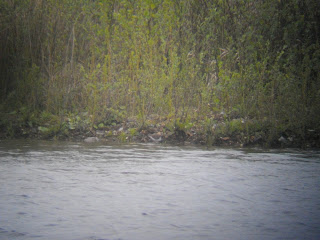