Today saw an unprecedented influx of Arctic Terns across the country, and it was no surprise that several found their way to Whitlingham.  I managed to get a lift to the country park after work, and scanning eastwards along the Great Broad I picked up 11 terns flying around near the island.  The first couple that I got a good look at were Common Terns, but I then saw an Arctic Tern land on one of the posts.  Walking level with them I began scanning and picked out another Arctic.  Justin was already on site and said that two Arctics had just flown east in addition to the two in front of us.  One of the Arctic Terns was determined to land on a buoy, regularly slipping off as it turned, flying up and trying again. 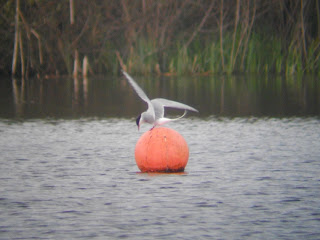 Whilst scanning for perched terns I found a Green Sandpiper on one of the wooden platforms along the North shore of the broad.  I see these annually at Thorpe, and sometimes on the river, but this is probably my first record at Whitlingham 'proper'.  Justin pointed out a lone Swift that flew over with a large mixed hirundine flock that was hawking insects above our heads, a decent record given the date.  The Swift took me up to 90 for the year at Whitlingham & Thorpe, with several common warblers still to go. 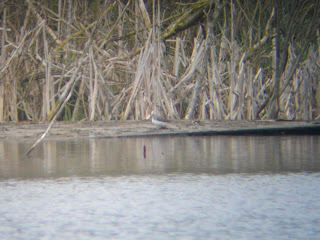